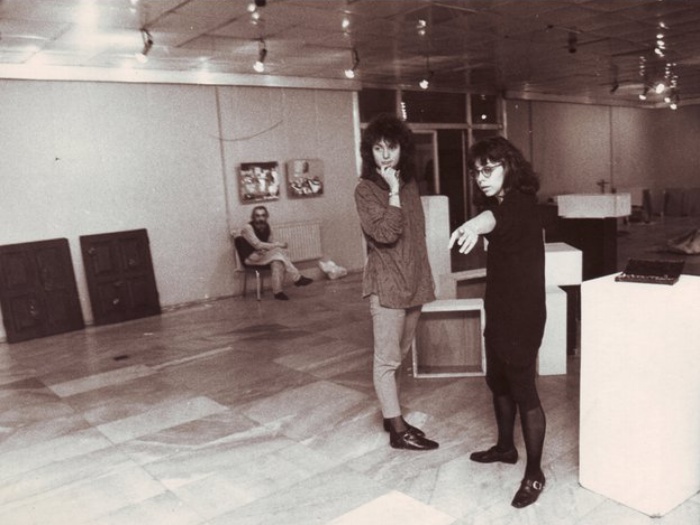 A long time ago I would joke that I wouldn't write history but memoirs for the history of contemporary art in Bulgaria. And the usefulness of memories is shown in Vesela Nozharova's book. It is clear that we all remember differently and based on our own experience and ideas, we interpret our memories in different ways. But as much as history is written by "overlapping" of individual memories - which usually do not find a spot in the articles that capture the events of the specific period - they can prove to be an important addition to its future research.

Targovishte, May 1986. I was sent by the Union of Bulgarian Artists to open an exhibition of an en plain air on painting if I'm correct. It was organised and financed by the hospital there, as Dimitar Grozdanov told me, which was unusual by itself. The exhibition was arranged in one of the old houses and there were these strange things in the yard: a white cube (pedestal) hanging on the vines, trails of white paper around it and some garlands here and there, I think. Happening! The artists made it after they arranged the exhibition. I remember Ivaylo Mirchev and Vladimir Penev with all the rest in this yard. I don't know if they participated, but they were clearly having fun with this art event. Then I went to an outdoor cáfe downtown to think over my speech but I couldn't think from all this excitement. All I could think about was "Finally, we got one too!!!" Because I knew what a "happening" was. And I knew thanks to Ivan Kirkov. In 1984 the Pulse newspaper tasked me with interviewing him. I had no idea at the time that he hated art critics but he allowed me in somehow - with the help of Andrey Daniel, who was his assistant in the Art Academy as I would later find out. During the meetings for the interview for the newspaper, I shared with Ivan Kirkov that the education on world art in the Art academy ends with post-impressionists and I was worried that I had no knowledge of nearly an entire century's worth of artistic development in the West. I should also note that in the isolated socialist Bulgaria, I only learned about rumours and legends in friendly circles, such as what Hristo Yavashev has done. I was a first-year student when I saw the exhibition The Artist at Work in America, which was fascinating - I still remember specific works and their locations in the halls at 6, Shipka Str. The problem was that I could not connect them to anything I knew here and they were made out to be pretty controversial for America itself. But I still felt as if there was some logic in their appearance, some line of development that led to here. I reassured myself that it would be made clear in the following years of my study at the Art Academy. But it wasn’t meant to be… So Ivan Kirkov gave me the book Modern Art - a big, voluminous, comprehensive book published in 1977, a gift from Christo as far as I remember, with a signature. It started from post-modernism. We agreed that I would translate it and I printed it in three copies - for me, for Ivan Kirkov and for colleagues who could be interested. The last and shortest chapter of the book talked about the newest events in art along with a certain scepticism on how lasting and important they would be. I also read about the "happening" in there and sort of learned what it was about... So in 1986, after returning to Sofia, I wrote an article on the happening, organised by Dimitar Grozdanov in Targovishte, for the Pulse newspaper, but it was never published. The ideological editorial of the newspaper stopped it because it did not accept the foreign word "happening".

During the summer of 1986 I was sent to Dospat to open an exhibition by a youths' en plain air on painting. With my arrival Stefan Zarkov greeted me with the words: "We're excitedly waiting for you. We need an art critic!". I was stunned - for the first time ever, I heard an artist say he needed an art critic. "For what?", I asked. "To explain to the rest of us, what we're doing", he answered. And I need to clarify something here. In the plain air, along with the other artists, there were some of Ivan Kirkov's graduate students from 1985. I met them when he invited me to a lecture of his in the Doctor's garden, as far as I remember. Then I realized that art conversations were an important part of his teaching method. His students regarded him highly, as he stimulated their individuality; his course had over 20 people, many of which transferred to study under him - as they didn't want to become "Svetlin's boys". And one of Ivan Kirkov's disciples was Stefan Zarkov. He took me to the roof of the only high-rise apartment block in Dospat at the time. And there, on the floor among the bearing columns of the building, there was a 42-meter long paper snake made of pieces of cardboard glued together in a serpentine pattern. All over it, Stefan Zarkov, Iva Vladimirova (also from Ivan Kirkov's course) and the artist from Vidin Chavdar Petrov, drew various ornaments - expressive, with bright colours and I even remember a crow… Their idea was to glue pieces of Styrofoam together under the snake and let it flow in the Dospat dam lake - from a peninsula in the shape of a dinosaur. And that’s what happened. I watched them release the snake from the hill over the road along with the other artists participating in the en plain air. I don't know what I explained about what was happening there but coming back to Sofia, I prepared a publication about this happening in the Pulse newspaper as well. The pictures were not good, which is why I had Stefan Zarkov make a sketch to use as an illustration. And in order to have the article published, the dangerous word "happening" was replaced with "an artistic intervention in the natural environment". Which turned out to be a much more accurate description of what had happened at Dospat. And this is where I must give credit to Maria Vasileva, who as an editor at Pulse newspaper did her best to follow and publish articles about these new events in the Bulgarian art scene - in all their undefined glory at the time. And this newspaper as a youth organ for culture was the natural place for them.

When everything used to be a "happening"

... and fun. I was intrigued by the fact that in these first happenings - usually en plain air and symposiums outside the official city art locations - an initiator got some of his colleagues to participate. Dimitar Grozdanov was very active in that regard. But for most of the participants, the happenings were just a bit of fun, a momentary distraction from the "serious" art that they did. Which is why their participation was a one-time thing - this did not open a path of development for them. But the initiators knew what they were doing - or at least came close to it, based on travels and non-systematic experiences that provoked them (in the general sense). For example, Stefan Zarkov travelled to Paris and I presume that is where he received the inspiration for the “snake” in Dospat. Sasho Stoitsov recently told me that he had been to a symposium in a socialist country where a western colleague gave him a catalogue as a gift, which he brought back to Blagoevgrad and started “studying it”. Among the original ways of receiving information and knowledge, was the "Cuckoo" journal of Orlin Dvoryanov and Dobrin Peychev. In one of the issues of this self-publishing magazine were just the quotes of western authors, which Krastyo Goranov argued against in his Marxist-Leninist Aesthetic... The following case that I learned about from a then young sculptor, speaks about the situation in the middle of the 1980s. On a travel to Paris he saw a poster for an exhibition of Joseph Beuys, he knew the name and decided to check out his works. At the front of the hall, he thought it was under construction... and left. The bits of information, the uncertainty in their own limited knowledge, as well as the lack of support in the art practice in our country were the reasons the students themselves seemed to not be too convinced in what they were doing. Parallel to that there was the question of how to determine and define it. But anyway, the process had started, the events continued and were becoming more numerous around the country. And when the word "happening" finally broke through into the newspapers, it became a common name for them all. The term was fine as long as it helped audiences clearly define these events as different from the regular art forms, although the artists themselves had already started the differentiation. Working in groups of like-minded people gave its results, including the base of communication, the shared knowledge of acquired, although small, personal experience. Before continuing, I will note the further use of the word "happening" among the widening audience. Noting the initially unusual form of art in our country, it evolved into public parties with happenings (for example in the Kyustendil town square in 1988). After November 10th, 1989, there were pre-election meetings with happenings and at one point the political parties themselves started organizing happenings. Due to this, the (Ever) Young Artist’s Club at the start of 1990s took the decision that members who participated in political party happenings would do so in a private sense and not engage the club with them. And while the term "happening" was gaining more popularity in the society, the art circles were starting to create and differentiate activities and performances. To a large degree this was connected with the introduction of the new forms in the city environment and in galleries around the end of the 1980s.

First meeting with the performance

The artists and critics

By the way, the Spirit of Manzoni is the last work I did. I participated more out of solidarity in some exhibitions at the Club of (ever) Young Artists with installations and conceptual works, which were generally poor. The only successful and important co-authorship was with Dobrin Peychev - "A Project for Transforming the Monument of the Soviet Army into CAMA (Centre for Avant-Garde and Modern Art)" from the year 1991. I wrote the text and he made the visual part. I am no good as an artist and I knew that from the start. It is not enough for someone to be able to draw well in order to be an artist, and I just do not have that mindset. The new forms tempted other artists and critics to artistic presentations. I mostly regretted the fact we lost Luchezar Boyadzhiev as a critic then, but contemporary art definitely won an impressive artist in him. Either way, in 1991 I realized that we, the critics involved with the new art forms, were becoming fewer and fewer and the job we had to do was growing. At the end of the year I wrote the first, as it turned out, contemporary art critic article. "What is Hindering the Avant-Garde Party" was published at the start of 1992 in the Pulse newspaper.

End of Part I.