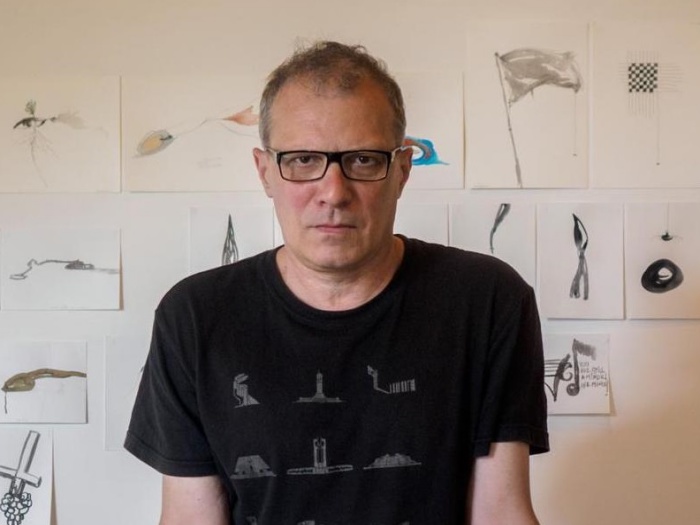 Luchezar Boyadjiev was born 1957. He lives and works in Sofia. He graduated from the National Art Academy in Sofia in 1980. One of the most famous contemporary artists from Bulgaria, his work is about personal interpretation of social processes, about the interaction between private and public, about urban visuality and the world of today split between utopia and dystopia. His media is installation, photography, drawing, objects, text, video, and performative lectures. Selected exhibitions are: the solo shows “Dystopian Cozy”, Sariev Contemporary, Plovdiv (2018); “Luchezar Boyadjiev. Sic transit media mundi /the present is too short and rather tight/”, Sofia City Art Gallery, Sofia (retro) (2018); “Places of Wisdom”, ICA-Gallery, Sofia (in partnership with Open Arts-Plovdiv, 2016); “Not a Library Artist either”, SALT, Istanbul (2013); “Artist in the Storage” from “The Other Eye” series, City Art Gallery, Sofia (2010); and the group shows in 2016-17 “Economize”, Ludwig Museum, Budapest, as well as “Symptoms of Society”, Guangdong Museum of Art (Guangzhou) and Zhejiang Art Museum (Zhejiang Sheng), China; in 2016 “Cold Wind from the Balkans”, PERA Museum, Istanbul; “Upside Down: Hosting the Critique”, MCA, Belgrade, and “Low-budget Utopias”, Moderna Galerija, Ljubljana; in 2015 “Inside Out”, City Gallery, Ljubljana; “The Grammar of Freedom”, GARAGE Museum of Contemporary Art, Moscow, and “Art for Change 1985-2015”, City Art Gallery, Sofia; in 2014 “Disconsent”, CCA “Ancient Bath”, Plovdiv; in 2013 “Economics in Art”, MOCAK, Cracow; in 2012 “The Best of Times, the Worst of Times”, 1st Biennial, Kiev, and “The Eye Never Sees itself”, 2nd Biennial, Yekaterinburg; and in 2011 “The Global Contemporary”, ZKM, Karlsruhe. The artist is a Founding Member of ICA-Sofia.
Luchezar Boyadjiev is represented by Sariev Contemporary since 2018.

Luchezar Boyadjiev belongs to that first generation of artists who laid the groundwork for Bulgaria’s contemporary art scene during the mid-1980s. Trained as an art historian and theorist, Boyadjiev set out to create art that questions traditional symbols of power and religion as well as the social conditions in his home country with respect to global developments and the virtual world. His analysis of the situation in the Balkans as an interim zone or Lacanian “Other” moved him to problematize the notion of transparency in the region in his catalogue text for the 3rd Istanbul Biennial in 1992, which was the first in which Bulgarian artists participated. Ever since, Boyadjiev’s work has taken up ironically critical stances toward history and social deployment.
His works from the 1990s revolve around religious symbols and beliefs, which the artist deconstructs in a variety of installations. “Fortification of Faith” from 1991, for instance, tells the story of Jesus and his twin brother—thereby forming links with Bulgarian traditions and iconography. In his drawing series “Philosophical Cemetery” from 1992, Boyadjiev attributes coffins to different intellectuals and creates mythical symbols for those who influenced democratic as well as totalitarian modes of thinking. Boyadjiev also frequently constructs utopias out of the various belief systems, an undertaking that—especially after the fall of the Berlin Wall—led individuals to questioning their identities in search for a possible future. The latter is manifested in the photographic project based on the installation “Chairs and Symbols. A Project for Peaceful Co-identification” (1995–2001), a series of eleven color photographs in which constellations of red and black chairs are deployed in conference rooms to form a cross, a sickle or a swastika, referring to media gatherings by denoting the agency of ideology as such. Some recent works deal with changing urban structures in a globalized world, visualizing images and text inscribed by the artist into culturally significant sites. Here, Boyadjiev addresses the notion of billboards and other advertising in public space as present-day icons, surrogates for formerly religious beliefs. The advent of the Internet has also provided a means by which the artist has critically altered spatial paradigms: these are stripped of their ideological or monumental significance, but still remain as sites that reflect past, present and personal forms of belonging.
- Walter Seidl 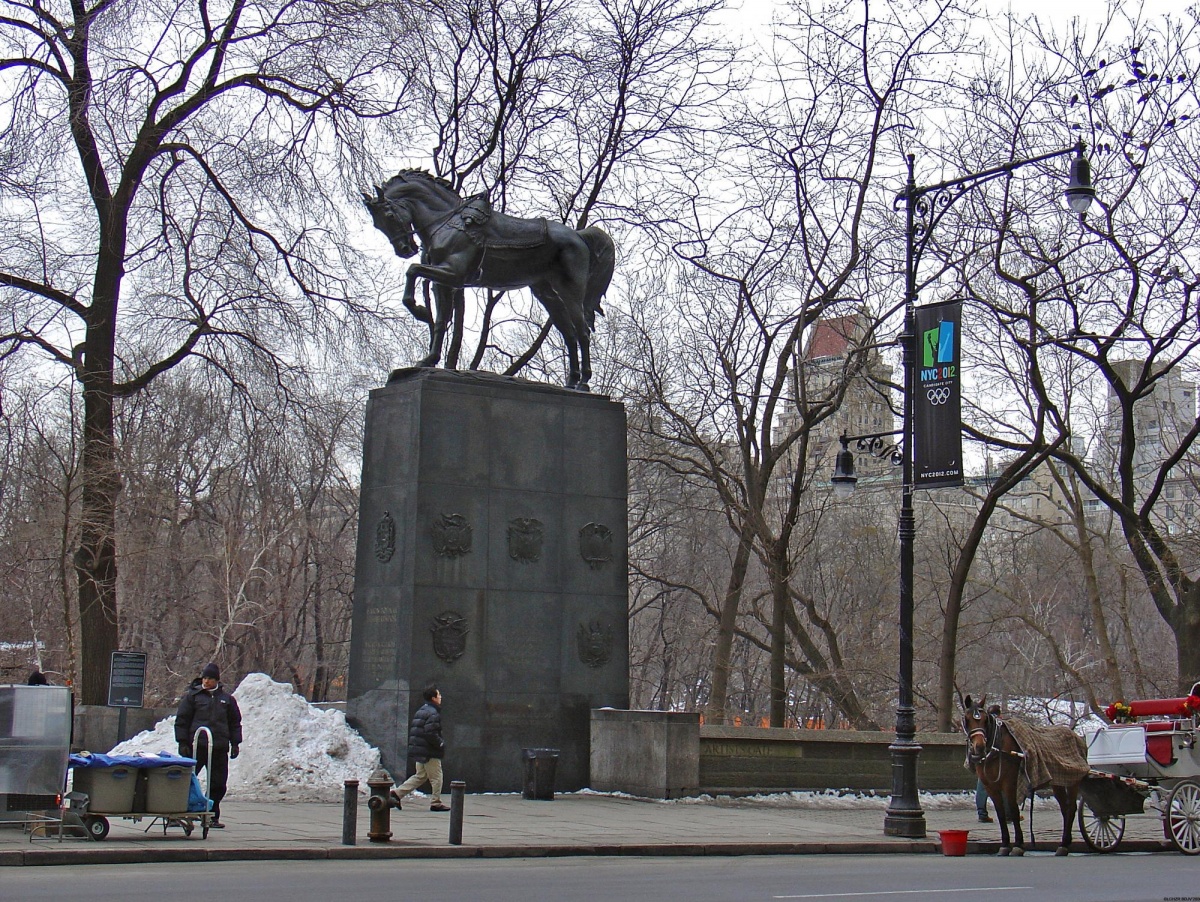 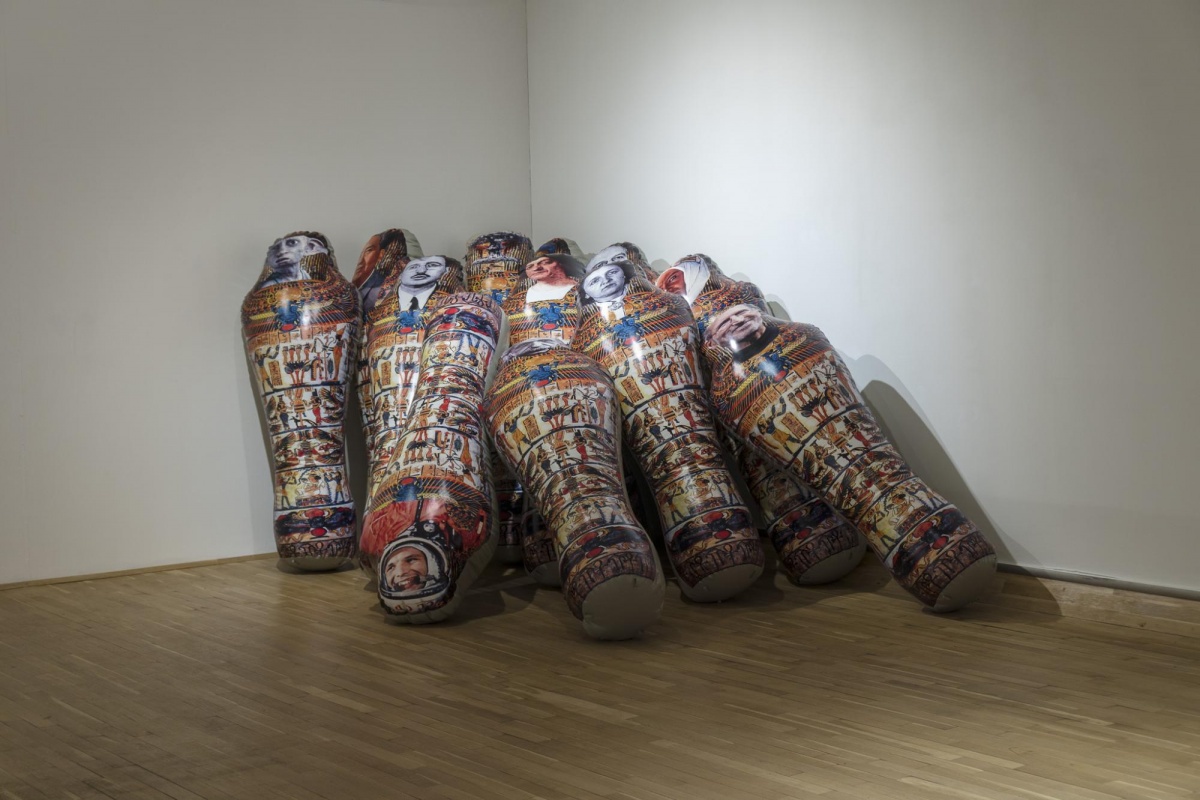 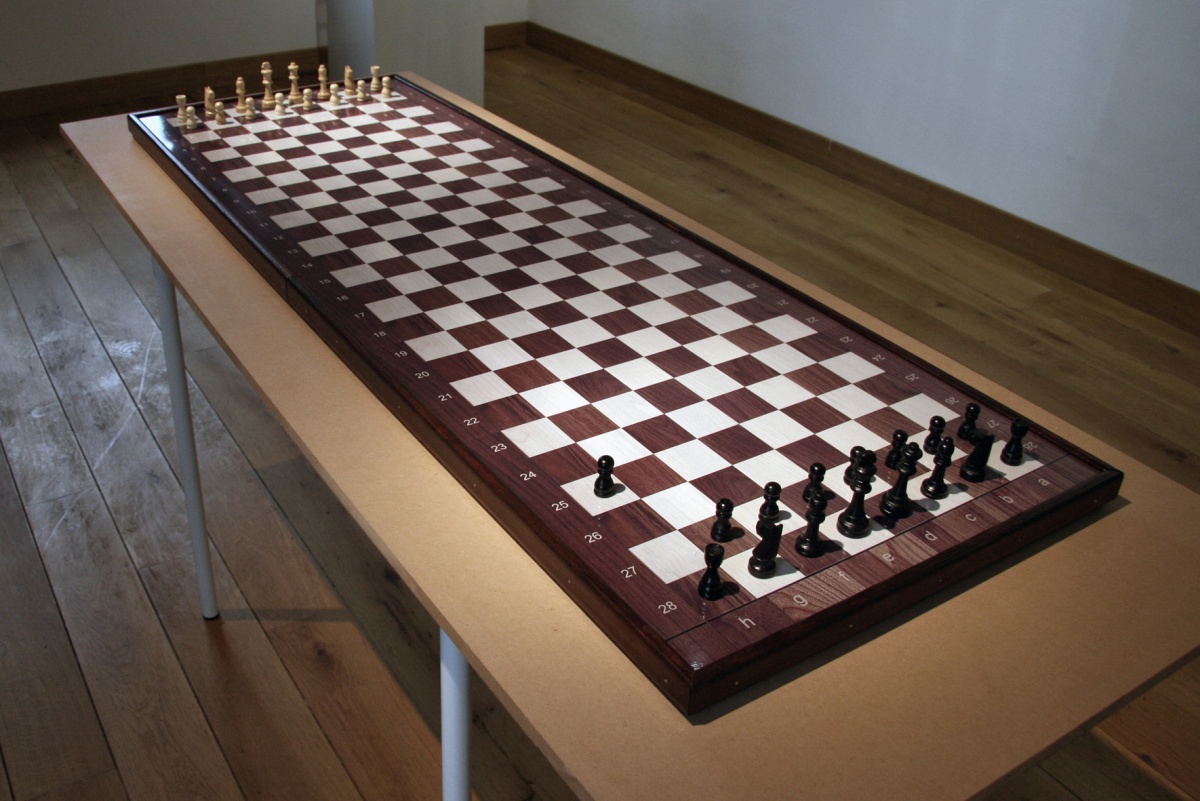 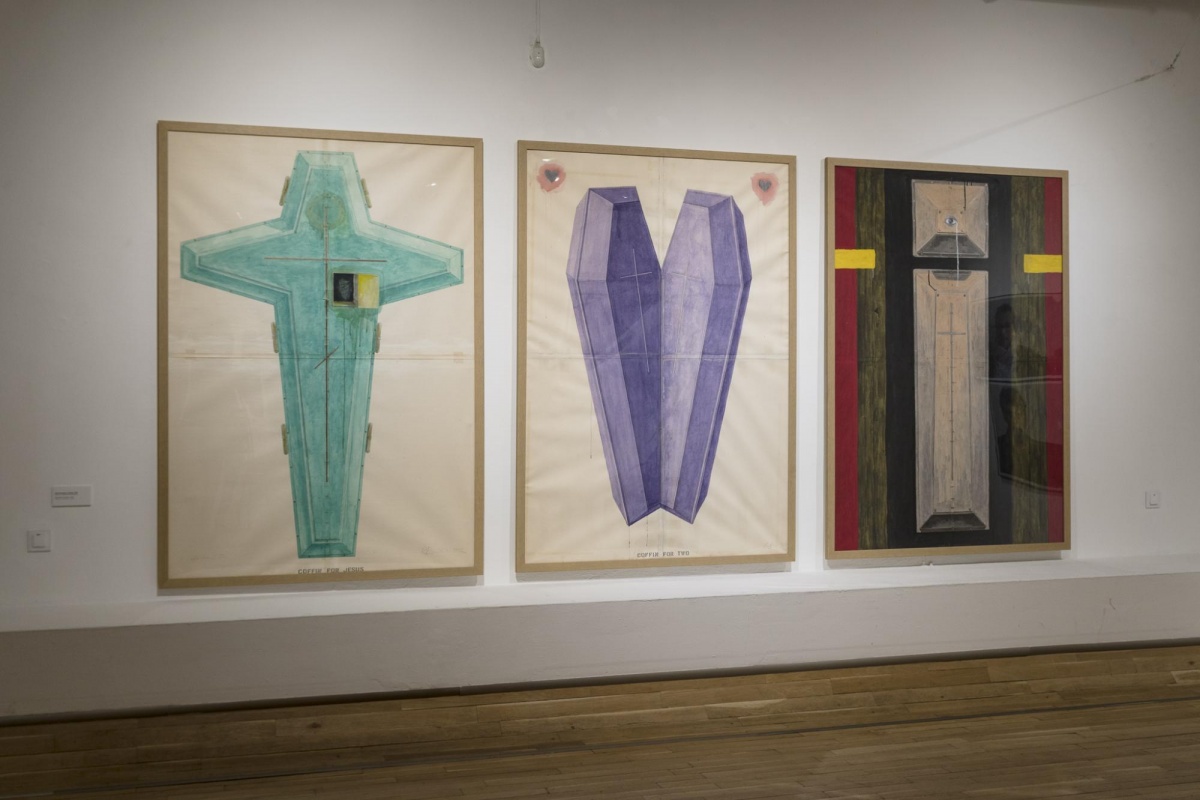 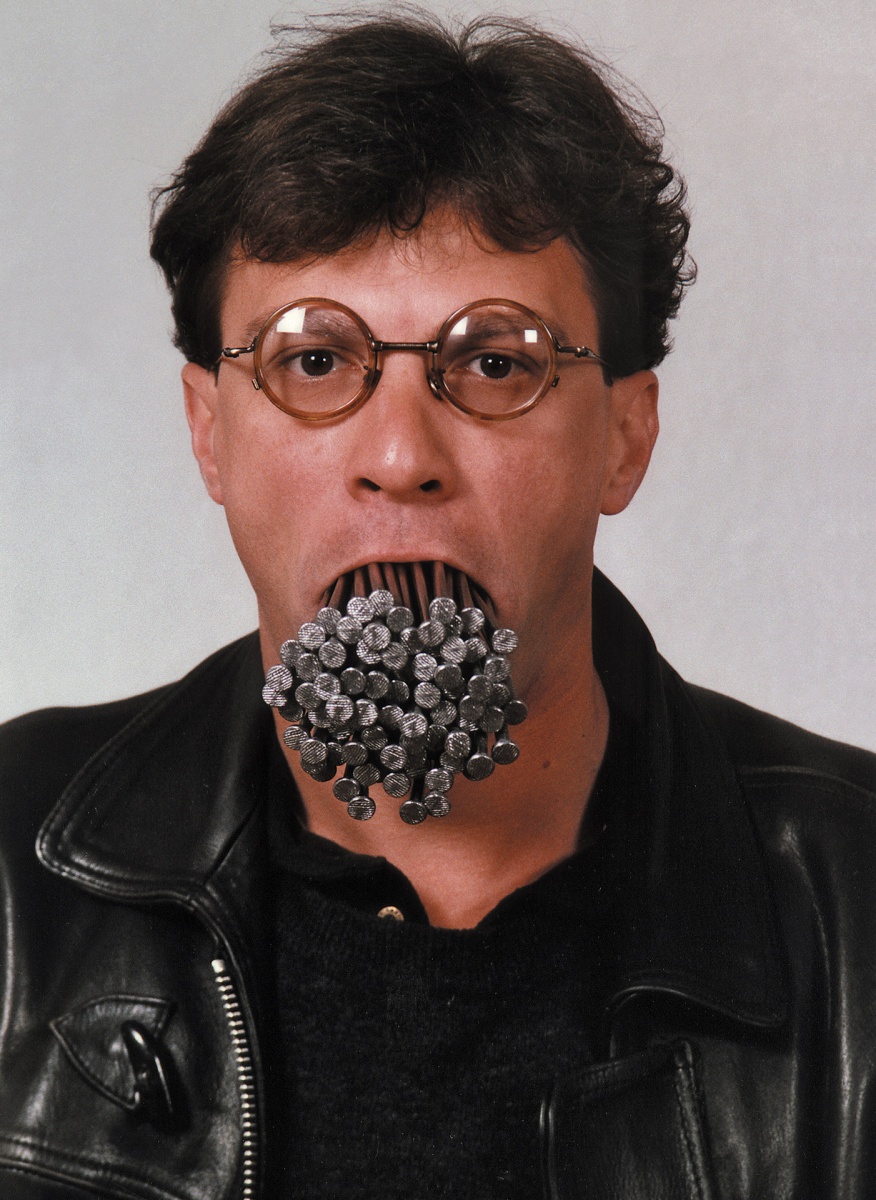 A conversation with Luchezar Boyadjiev Art for Change 1985-2015 I Supply! You Demand? Luchezar Boyadjiev: Artist in the Storage Fortification of Faith It's Too Early to Say The Balkanization of Alpa Europaea Christo & Jeanne-Claude – the beauty (yours), the money (theirs), the publicity (shared)