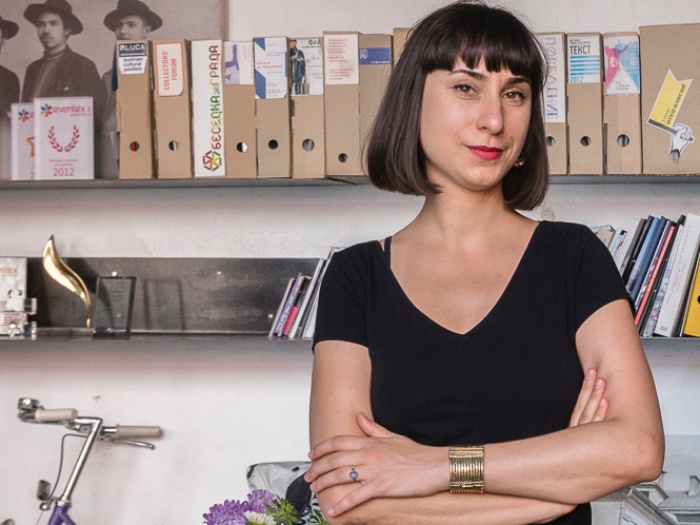 Vesselina Sarieva was born in Plovdiv, Bulgaria.
She describes her work at the beginning of her career in Bulgaria as a "cultural activist", later as a "curator of context", and in this broad concept covers her diverse work positions in the field of culture. Since 2004 Vesselina has worked actively for the creation and sustainable development of innovative models and practices for supporting the contemporary Bulgarian culture and art. For this purpose, she founded together with Katrin Sarieva a three-way model, consisting of a gallery – Sariev (2004-2011 Sariev Gallery for Contemporary Ceramics and Photography until 2004, Sariev Contemporary gallery with a representative list of authors since 2012), Open Arts Foundation (2007) and cafe and community center – artnewscafe (2008). The headquarters of these organizations are located in Plovdiv, next to each other at 36, 38 and 40 Otets Paisiy Str., forming a kind of cultural center, supplemented in summer by an open stage for art and culture – FLUCA: Austrian Cultural Pavilion (since 2016).

Today, the activities of Sarieva and her organizations extend beyond these physical spaces with projects in the public space and other cities, both Sofia and international, working with broad partners network and finding recognition and followers. Vesselina Sarieva began working in the field of visual arts and culture in 2004 with her mother Katrin Sarieva, with whom she developed the family tradition of supporting artists, art and culture. Prior to her work in the visual arts, Vesselina Sarieva was engaged in literature. She has Master's degree in Slavic Philology from the Plovdiv University, she has specialized in Croatian language and literature. Until 2006 she had realized several poetic projects and the book "OSHT" published by Janet 45 with editor Georgi Gospodinov.

Vesselina Sarieva’s work and vision have been a key factor for activating the cultural scene in Plovdiv and for the promotion of Bulgarian contemporary art abroad in the past years. For her merits she received the Iron Medal for Contemporary Art “Ventsislav Zankov” in 2010 and the Woman of the Year Award of Grazia Magazine in 2011. Capital Newspaper included her in its top 100 of the most influential women in 2012. She was also part of the project “40 under 40” by Darik Radio for successful young people.

Some of the key larger projects, initiated and conceptualized either individually or in a team of experts, and organized by Vesselina Sarieva and her organizations, are:

Night of the Museums and Galleries Introduction to Contemporary Art Focus: Bulgaria Plovdiv